Will horizontal loyalty save journalism? 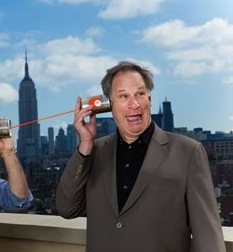 The speech by Radiolab host Robert Krulwich is one of the best (only?) optimistic things I’ve read about journalism since I saw newspapers my friends and I worked for take a nosedive in quality over the past five years. And it’s certainly one of the most honest things I’ve read about the industry since graduating J school, a period of years when we were all fed tone-deaf and and unrealistic optimism about what was clearly a flawed business model (for instance, the McClatchy head’s video message to employees that taking on a ton of debt by buying Knight Ridder was still a smart decision, ending the video by quoting [and then playing] the song “You Can’t Always Get What You Want.”)

The speech to Berkeley Journalism School’s Class of 2011 earlier this month should be required reading for every recent J school grad, every person toiling away in the journalism salt mines and everyone who hasn’t abdicated the future to aggregators and partisan news outlets.

In a nut, Krulwich’s point is: stop caring about big media. The era where a job at CBS, The New York Times or Newsweek meant you had “made it,” that you had reached the plateau of your career built upon a mountain of hard scrabble reporting chops, and now you could coast for a career along with the big fish, is most certainly over. A job at the NYT is no longer an invincibility cloak.

“You can’t trust big companies to keep you safe,” Krulwich told the grads.

Instead, Krulwich advocates something that would have seemed silly in the gatekeeping era of journalism (the one I started working in, the one in which the image of the all-mighty, incorruptible gatekeeping editor was your guiding star through the field):  be horizontally loyal. What that means is to gather with your cohorts: your recent grads, the unemployed buddies, the curious journalistic adventurers and basically all the talented, under-employed people you know. Then, make a go of it together.

“Instead, think about getting together with friends that you admire, or envy.  Think about entrepeneuring. Think about not waiting for a company to call you up. Think about not giving your heart to a bunch of adults you don’t know. Think about horizontal loyalty. Think about turning to people you already know, who are your friends, or friends of their friends and making something that makes sense to you together, that is as beautiful or as true as you can make it.”

Did you catch that? Krulwich is talking about DOING something. Not sitting around waiting for the endless abyss of the job market to scream back at you, not declaring the industry dead, cashing in your chips and going into PR; not bitching and moaning and clawing on to a dying publication. Just get out there and make something happen: blog, tumbl, zine or create, then report and publish. Why is he saying this? Because Krulwich knows that his generation doesn’t have the answer to how to make it profitable again and that they won’t be the ones to steer this boat to shore.

But he does know that the future rests on this interesting blend of journalism and entrepreneurship that is arising in the newer generation of people interested in the biz. Those are the same ones who — thanks to the ease of self-publishing and self-maintaining a site and a business in the internet age — realize that being able to produce content goes hand in hand with being able to effectively maintain the means to distribute it.

Media critic Jeff Jarvis said the same thing at last month’s Blogfest at The Bell House. Jarvis’s teaches an “entrepreneurial journalism”  at CUNY, a course topic he described as worthy of the question: “Am I corrupting journalism?”

Maybe, Jarvis shrugged, but if if they don’t find a way to make money, there won’t be any journalism left corrupt.

His big presentation on the night was a proposal for a local ad network connecting disparate Brooklyn blogs into one aggregate, the strength of which would be impressive to advertisers and lucrative to its members.

“Why the fuck would a journalism school want to do that?” he asked, again, paying his respects to the invisible wall that was always said to separate newsrooms from advertising departments in the past.

Why the fuck? Because the only way out of this is with horizontal loyalty, they say. Get together with your buddies and give something a try, blog, support each other, push projects  and pass along content, and maybe we’ll figure out something from the ground up. The great thing about not raking in the money is that we’re not all at competition with each other; we’re competing against not existing at all.

This entry was posted in newspapers, writing. Bookmark the permalink.

2 responses to “Will horizontal loyalty save journalism?”