On trying not to abandon your blog 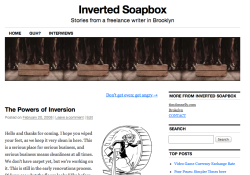 Hey, it's the first ever Inverted Soapbox post! Meta meta.

Readers here will notice the flood of posts has dried up to an infrequent drizzle over the past year or so and it’s due in no small part to being Actually Busy with Work That’s Read By More Than Four People. And this is the problem with blogs, the personal kind you start when you’ve got nothing else to do, say you’re maybe a frustrated reporter stuck at a small-town paper writing the same rezoning stories over and over again like some sort of Mac-toting Sisyphus.

So then you find yourself (not complaining at all) in the position of spending 8am-10pm some days in front of the computer writing, posting, editing, reporting, re-editing, pre-posting and working on even more pitches to give yourself even more writing and reporting work, and by the end of the day you’re so dead tired of staring at the computer screen and banging out content that you want to spend your one free hour chugging Trader Joe’s wine and killing an episode or two of Dr. Who. Which is why, if you ever look around the internet, you see lots of withered and abandoned blogs among the recently promoted set of the internet, the folks who had time once to blather away to their little corner of the internet before, you know, a bigger audience might look them up. Suddenly this little webspace that once contained emo ramblings about breaking up with a girl in South Carolina (long-since deleted) or what the iPhone means for the death of the bar argument (still up here somewhere) suddenly might be stumbled upon by someone I’m trying to profile for Inc. (like this guy) or, yikes!, even a potential date (Yes, I know who you are, sometimes. Statcounter is like reverse stalking: stalking the people who are stalking you. Does that count as stalking? Yes, I’m asking you, stalker).

That’s not to say there’s not still value here. I’ve blogged it before, but it’s worth repeating: when you’re a down-and-out writer trying to figure out what to do with yourself and just looking for any damn receptacle to empty your brain’s spit valve into, there’s something empowering about being able to hit a big fat blue PUBLISH button any time you want, and then, bam!, you’ve got something out there that’s just as globally accessible as the latest New York Times update. How people managed to stay sane in the world before the internet gave an instant dumping ground, I’ll never know. It’d probably be like living in a world without masturbation, where none of the attractive girls ever wanted to stop and talk to you.

Here I find myself, fighting sleep and sitting up late in our Brooklyn home office, thinking about all the work I’m supposed to do tomorrow, nearly three years after I started this damn thing after filing a story at a bar on Hilton Head, where I could barely get a few minutes to myself to concentrate in between being berated by the drunken happy hour locals asking me what I was working on. And now I’m less obsessed about checking page views here, thinking that maybe, possibly?, someone with some Eye For Talent might read this thing and offer me a writing job of some caliber, which is, it turns out, not something that happens. But I’m less obsessed about it now because I’ve transferred obsession elsewhere: checking the stats on Brokelyn posts, looking for linkbacks on Inc. stories, watching for Facebook shares over at Thought Catalog, all of it mashed together in some sort of ever-spinning numbers game (Dreidel?) that is hell for those of us prone to obsessive compulsive type behavior, especially when you have real-time stats that let you follow every click, every share, every second of every day. So it becomes less important to see if, say, a post here about Simpler Times beer or the Hipster Grifter (memories!) goes viral here, though it’s always a nice bonus if it does.

Maybe the highlight of this blog will be getting included on the FreeWilliamsburg blogroll,  a role I’ve surely disappointed due to aforementioned lack of posting. But this space was never meant to be an entity on its own, never meant to have a focus, or a specific audience, or a mandate for change, or whatever. It was, at best, meant to develop a voice and to keep flexing some writing muscles even in the most dire depths of daily newspaper reporting (and subsequent unemployment). Which it certainly did.

And now we’re here, in 2011, when a WordPress blog feels like a clunky old dinosaur because all anyone wants to read is short burst pictures and memes on Tumblr, and writing anything longer than 100 words is like it’s an invitation for people to click away to something more immediately satisfying, like a list of unintentionally hilarious superheroes.

So basically all this is about the problem of being too busy to spend time overly reflecting on minuscule stuff that doesn’t matter for an audience that may or not be listening, which, again, is not a real problem at all. The internet is littered with the husks of blogs that never got off the ground (you know who you are) and I never wanted this to be one of them, even if after three years we’ve slowed to a trickle of posts and sometimes I spend too much time playing with SEO terms elsewhere to spend 20 minutes here.

It’s hard to sit down at night and think about blabbing ad nauseum here when a similar expenditure of effort could go into pitching something for any number of publications I should be trying to write for — a SUPER FULFILLING AND TOTALLY REWARDING PROCESS THAT DOES NOT MAKE ME FEEL LIKE A WORTHLESS WRITER AT ALL WHEN NO ONE EVEN GIVES A COURTESY RESPONSE, (assuming you can render that part of the sentence in the new sarcastic font — or even just busting out the same thing for Thought Catalog, whose editors would graciously run it and give it a real audience, full of sharers and commenters and haters and the lot. So why do it? Because it’s 2 in the morning and I’m a bottle deep into the two buck chuck and I can’t exactly write something for Inc. magazine at this time, right?

I gave advice to young (read: college-aged. Because I’m A BILLION YEARS OLD NOW) journalists once that the best thing you can do when you’re starting out is to blog, blog, blog, blog your heart out, because, simply, why the fuck would you wait for anyone else to tell you that you can publish something you think is important? If you’re trying to be a for-real journalist, leave your personal opinions out of it, but get out there and dig up your own stories, your own narrative, and get your writing out into the world, every damn day you can. Every time you hit that juicy PUBLISH button, you feel the electric rush of responsibility and power that used to be the domain of just a select few.

So, as a test to see if anyone is still reading, I got a tattoo two weeks ago of this symbol, which you’ll only get if you spent any time working in newspapers where crusty old people still held onto anachronistic typographical traditions. But it symbolizes an end, the end to the idea that things would always be the easy track of newspaper conquest that I pictured in college, and the acceptance that the era of newspaper and print media I coveted so hard had were killed with the curt efficiency of a stern night city editor. And it was a celebration of turning 30 this year, getting published in The Atlantic online and a feeling that things might just be going OK.  After that, the world is full of possibilities.

This entry was posted in Uncategorized ramblings and tagged blogging, meta, ramblings. Bookmark the permalink.

4 responses to “On trying not to abandon your blog”