Spider-man does not endorse newspaper bailouts

Lots of time is spent in the outer realms of the Hypothetical Future of Journalism discussion world wondering about the plausibility and impact of government bailouts for newspapers. Sen. Ben Cardin of Maryland, for instance, introduced a bill to offer tax incentives for news outlets to restructure as non-profit entities. Other ideas discussed include straight auto-industry style cash-infusion, short-term loans, or even the idea of enshrining the newspaper industry as a public trust in the spirit of the National Endowment for the Arts or public libraries. The arguments go: newspapers are too big to fail in the sense of their importance; the medium itself has lapsed into obsolescence but the in-depth reporting that has remained the domain of newspapers staffs after all these years is too crucial to a vibrant democracy to let slip away. No objective news, no intelligent discourse; Know news, know discourse, etc.

As President Obama told the editors of the Pittsburgh Post-Gazette and Toledo Blade in an interview last year, according to The Hill:

“I am concerned that if the direction of the news is all blogosphere, all opinions, with no serious fact-checking, no serious attempts to put stories in context, that what you will end up getting is people shouting at each other across the void but not a lot of mutual understanding.”

All that is well and good in the hypothetical hinterlands, but would it really work in a country where the most popular TV news source is founded on the principle of the unreliability of the ideologically tainted dictatorship of the old media (I’ll let you think about the irony of that whole premise on your own for a minute).

Luckily, a likely artist’s rendering of a scenario has been laid out for us, in a little periodical known as Spider-man. In Spider-man universe, the publisher of The DB (the tabloid successor of J. Jonah Jameson’s Daily Bugle) becomes the first recipient of a government bailout. And the angry masses don’t care for it at all.

So, in summary, here’s what happens (Note: all images belong to Marvel Comics The Amazing Spider-Man, issue 612, January 2010): during the struggling economy present even in fictional Marvel Universe New York City, news of the bailout is not met with enthusiasm.

J. Jonah Jameson (now mayor) revels in the public acrimony hurled at the paper’s new publisher, Dexter Bennett, while crowds gather in the street to protest what they consider corporate greed. 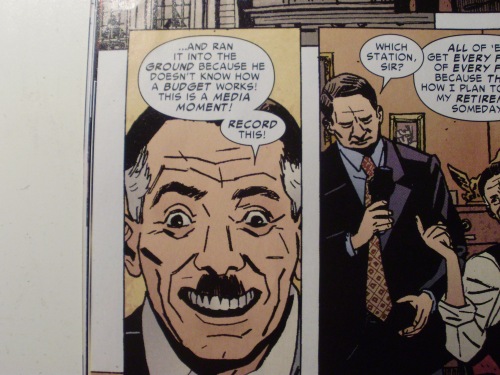 Then, of course, Electro shows up acting like a Tea Party hero and starts to rally the crowd into a frothing anti-government, anti-bailout mob. 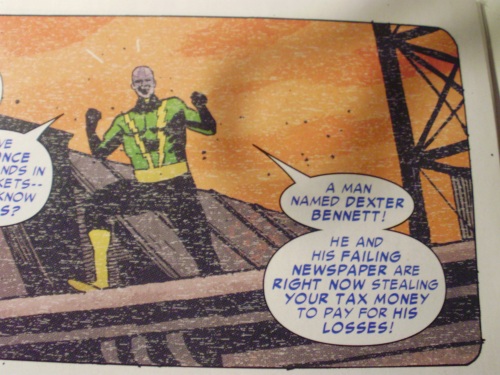 Them masses, they love a good spectacle, even one inspired by a super villain who once belonged to groups called the Frightful Four and the Sinister Six. The next day, the populist backlash reaches new levels: 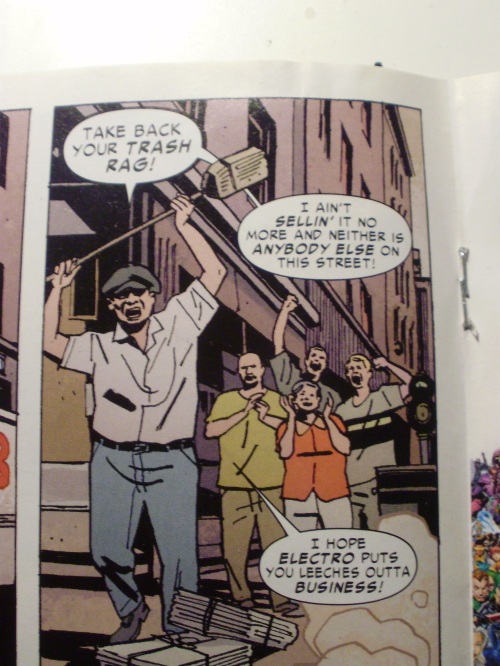 Next, the effigies and Kanye references begin:

Also, apparently anti-bailout sentiment dovetails with the pro-pot movement, according to that guy’s shirt? Did The DB cover protests outside its own buildings?

And for all the writhing indignation of the crowd, they can’t seem to quite put 2 and 2 together here: 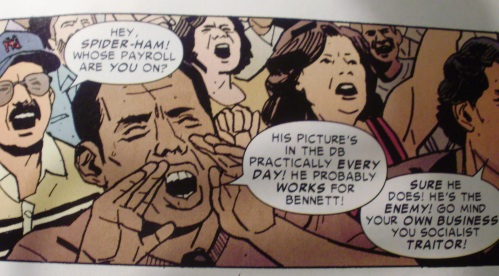 But surely your friendly neighborhood Spider-man/new media journalist can sate the passions of the crowd, right?

And that’s the last page.
Yikes. So, what have we learned here from this completely fictional, wholly satirical take on this option for the future of newspapers? Try to protect reporting with government money and a libertarian super villain with electronic super powers will turn the city against you.
In truth of course, a newspaper industry bailouts are a terrible idea for several reasons, not the least of which is that the very concept creates an incestuous relationship between the press and the main entity it is tasked with watching over. Also, it’s probably a poor investment, as papers have yet to discover a strategy to financially justify their existence. Even for the public trust that is NPR, only 10 percent of the funding comes from the government via the Corporation for Public Broadcasting. The rest comes from member station fees and those pledge drives we love so dearly (my latest issue of The Atlantic is late by the way, WNYC).
The NPR model is one some have suggested is the best outlet for big media outlets such as newspapers: non-profit status, floated along by underwriters and members. The Voice of San Diego is a successful example of late; The SF Chronicle is considering pursuing investors to help salvage itself from the grave.
Newspapers have always been integral to the comic book universes. Who would be left to cover all these super-villain attacks if those news sources tumble like their real-world counterparts? Who knows, but even Supes is feeling the pinch.
PREVIOUSLY: Spider-man’s got radioactive tweets
Headlines ripped from the pages of comic books

This entry was posted in newspapers and tagged marvel comics, newspaper bailout, newspapers, spider-man, the DB. Bookmark the permalink.