on a week of dealing with blog piracy 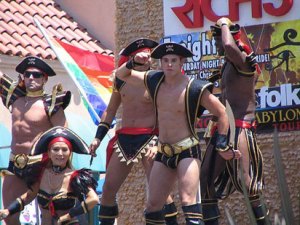 Content piracy: not just for MSM any more! (foto via GayGamer)

One of the most common slights against the blogosphere (that word itself now somewhat of a slight as it segregates blogs into a shady lawless bubble separate from polite media society) is that bloggers are a parasitic bunch who take the output of hardworking journalists and adorn it with their own commentary, snark, derision, insights or, occasionally, supplemental information. This happens, as the trope goes, while bloggers concurrently deride the value of traditional media such as the Times and CNN, throwing hand grenades of viral discontent at the very hands that feed them (for no charge too).

This is no doubt true in many cases. The vampiric media syndrome is the bane of journalists who watch people tear their work to shreds on the internet, knowing full well that bloggers would have nothing to talk about if the New York Times, WSJ and so forth suddenly stopped publishing. Even on a large-scale, successful blog site, such as Gothamist, I’m not a fan. The Gothamist model essentially rounds up the interesting news items from the Times, Post, Daily News, NY1 and others and summarizes it for their audiences, adding a level of humor, snark or commentary (which is admittedly lacking from the big sources) and repackaging it in a more attractive way for the blog-savvy masses.

But Gothamist does little of its own reporting, and very rarely does it give overt credit to its source (see if you find the words “Daily News” in this post at all). Even more annoying is seeing a Gothamist item that’s based on a NY Times story shoot to the top of a site like Digg, instead of giving all that traffic to the Times story on which it’s based.

So then it was a strange week in the Brooklyn blogodome when we stumbled upon two aggregator sites that were wholesale pillaging entire posts from Brokelyn and a handful of other high-profile, respectable blogs from around the borough, and rerunning them without proper credit or distinction.

The first one, City.com, seems like a highly desirable url property. It’s owned by a company/guy who deals in the acquiring of “premium generics,” also including prices.com and cellphones.com. This site is a crawler, devoid of any original content save for a few mostly unhelpful directory listings of local businesses. Suspiciously also lacking is an “about” page and any sort of stated mission goals or purpose. It runs bylines of the original blog author, but doesn’t distinguish that the post was produced entirely by another source except for a small “source” tagline at the very bottom.

The second, Brookl.In, had the same sort of setup, except was an even more egregious repurposing of content: the site was a meta crawler that gathered posts from all the major Brooklyn blogs and reran them on its own domain. It contained little indication whatsoever that the post came from another source (you could click on a headline and be redirected back to the original, but why would you? The whole post was there already). Anyone reading, say, a post marked “$8-and-under nachos worth the mess” would have no way of knowing it was an original work by a Brokelyn writer, repurposed and unlabeled on Brookl.In.

The same thing was happening to Brownstoner, Fucked in Park Slope, Brooklyn Based, Greenpointers, BrooklynVegan, Eat It, StreetsBlog, Gowanus Lounge and more. While we’re all competitors in some way or another, these are all good folks who put a lot of effort and passion into their projects, a lot of times for little or no financial reward. The very least they deserve is your eyeballs and clicks.

This is a big deal because sites like City.com and Brookl.In can sell ad content or Google Ads space against the stuff they aggregate. In old-media terms, imagine someone putting together a magazine in Raleigh comprised entirely of stuff leeched word-for-word from the local News and Observer and The Independent Weekly. Then they sell ads and distribute it for free in your driveway. Even if they sell shitty, tiny ads or solicitations for Nigerian scams, what do they care? They’ve got no overheads for content gathering so the profit rolls in unmolested.

New media example: we ran a promotion with the BK Heights Cinema this week. If you Googled “Brooklyn Heights cinema discount” you might have come across the City.com posting that appeared right below ours in search results. You say to yourself: “City.com? That sounds like a reputable domain name.” Then you click on their site and, boom, the only chance we have for traffic monetization from your visit is gone entirely, because another site has cut and pasted our entire content, without directing you back to our page.

Look, here’s the breakdown, and the reason I get so riled up about this: content is all we have. If you want to link to us, fine, please do. If you want to run a summary, and the first graf of the post, OK, we can live with that (Huffington Post does that, with the crucial link: “Read the whole story: Brokelyn“). But to take our whole post and rerun it against your own ads? Not cool, brah. We’re not churning in the ad money, we’re not working with a vast list of paid subscribers. It’s just us, pumping hours and hours of effort into this whole blogging enterprise and giving it away for free because we enjoy it, and we’re proud of the content we’re putting forth. We have a site design that serves as a great complement to the content, ongoing features and a community of commentators. We max out our SEO for each post to help people find us when they’re looking for cheap living tips in Brooklyn. I’m sure the same goes for the rest: Brooklyn Vegan is the reputable go-to source for news about a certain type of shows and bands passing through town. Should someone else be allowed to hijack their work?

Save for a small trickle of income here and there (mostly from events), the Brokelyn staff is entirely volunteer. That means all of this, the deal hunting, the Ikea-trekking, the pruno-making, the secret shopping, is undertaken because we believe in the mission: that brokeness, lack of income, rent hikes, exorbitant bar prices, the shitty journalism job market, shouldn’t stop you from doing what you’re passionate about and enjoying life in the the greatest city in the world. We measure success in page clicks. Measuring it in financial value maybe is somewhere down the road too. But to be successful, audiences have to know where the content is coming from. What good is this scoop about bizarre Park Slope children’s eye experimentation if no one on the internet knows to look back to FiPs for more juicy tidbits like it?

So, to update: we sent an email on Wednesday to the owners of City.com. They didn’t respond but removed our content immediately (though other blogs’ content still remains). We sent an e-mail to the owner of Brookl.In who responded:

It’s a WordPress plugin that just grabs content from Brooklyn related blogs. It recently came online and the current plugin [WP-O-Matic] does not say “Via… xyz”. It’s a meta aggregator. The plugin was intended to be modded by us to post all auto feeds into a blockquote and attribute it [not a default setting or a quick hack with the plugin]. It’s just a meta site to subscribe to posts from a ton of brooklyn based blogs.

Which to me sounds like saying “I didn’t steal your iPod. It was just this robot I programmed to steal electronic music players that took it.”

Perhaps this was an honest mistake the developer intended to go back and fix to turn it into more of an aggregator that would direct traffic to the source (which we could even benefit from), but, still, it was in operation for at least a few weeks already, continuing the pattern of grabbing and republishing other blogs’ content with no attribution. Any sympathy for what could have been an honest mistake completely disappeared when the  site’s owner also responded by indicating I had sent off an e-mail without my morning “enema latte,” the consumption of which would have made my e-mail more friendly sounding, maybe? I’m not sure on that actually. Then he took down the content and — in my favorite defense mechanism of people who don’t understand how media law works — said he would see me in Brooklyn civil court over slander. (Then today he used Twitter to threaten IRL violence and tried to bait me into a twitter-spitting match. I cannot stress to you enough how far you’d have to look down the list of Productive Uses of Time to find that).

There is a cautionary tale in the works here, even if it’s just about how we all need to be vigilant to pay attention to who’s using our content. Aggregation is big right now and only going to get more prevalent, but there has to be a line between helpful directory type services (a “here’s what’s going on in brooklyn blogs today…” link listing) and complete stealing of content.

We’re all here, producing original content, and distributing it for free. But hey, maybe all this blog piracy finally means we’ve officially hit the big time! After all, who steals something that isn’t worth anything?

6 responses to “Content is king, and everyone wants the crown”