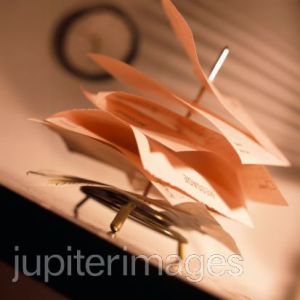 The Washington Post’s new CMS eliminates the option to “spike”a story  to indicate it wasn’t going to make it in the paper. The anachronistic newsroom colloquialism was replaced instead with the colorless “delete.”

To “spike” a story is to eliminate it before it sees print. It has its origins in a physical act. If you look at old photos of newsrooms from the ’30s or ’40s, you will see eyeshade-wearing men, their sleeves held up with garters, sitting at long tables. Sticking up from those tables are metal spikes. A story that was insufficient for whatever reason would be smashed atop the spike, the paper perforated and pinioned like a butterfly or the head of a traitor. We long ago stopped using metal spikes, but the word persisted. In our old computer system, you could dispatch a story by clicking on a drop-down menu, highlighting the word “Spike” and clicking enter. It was a bloodless, digital spiking, but I always got a kick out of knowing the word connected me to journalism’s past.

I know lamenting the eroding vestiges of the hearty days of newspapers yore is getting old, but I really liked the term “spike.” As opposed to the multi-faceted term “delete,” to spike something indicated an aggressive enforcement of standards for a publication. I’ve seen too many publications where talk of standards was really just idle chatter that was helpless against  the ever-hungry maw of daily deadlines: that is, something was often fit for print if it was 1) finished and 2) able to be molded by an editor into a passable state by the use of large-scale excavation or a delicate combover of writing to obscure missing facts.

I’m sure this wasn’t the first time I heard it, but my first memory of hearing the phrase was in the Diamondback newsroom as I was just starting as a G.A. reporter. News editor Alissa Schepesi was slogging away at a candy colored iMac clicking idly at a some GA story on the screen, until finally, after several frustrated huffs, she pushed back from the desk and exclaimed to anyone nearby, “OK, I’m spiking this story. I’m done with it.” She changed the Newsedit status, opened up the next story in the queue and kept editing.

To be spiked was to be brutalized, to be rejected; it meant, simply, you weren’t good enough. It’s like an editor shouting “Get this crap out of my face.”

I’ve had lots of pitches rejected, though I’m happy to say I’ve never been spiked. But now I fear the euphemistic “delete” key is looming above.

This entry was posted in newspapers and tagged journalism, spiked stories, washington post. Bookmark the permalink.