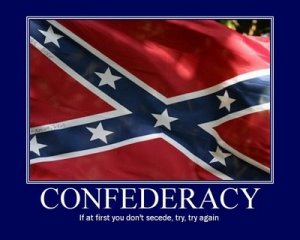 Today the intesphere was full of much head-shaking and guffawing in disbelief at the news about the South’s plans to honor the 150th anniversary of the start of the Civil War — a fight, as most will remember, the South surely lost, though the wounds, as the popular narrative goes, are still a little raw. The internet chatter was on the obvious cognitive dissonance of it all: that a conflict so many in the other part of the country classify largely as a battle over the right to imprison and enslave other human beings would be celebrated at all, let alone with a blind eye turned to that particular aspect of the war. As the Times wrote:

The events include a “secession ball” in the former slave port of Charleston (“a joyous night of music, dancing, food and drink,” says the invitation), which will be replicated on a smaller scale in other cities. A parade is being planned in Montgomery, Ala., along with a mock swearing-in of Jefferson Davis as president of the Confederacy.

To readers in the North, all this adds up to some mind-baffling historical doublespeak and cultural insensitivity, like celebrating the anniversary of the Dred Scott decision or hitting a pinata made out of broken Indian treaties.

I spent four years living in South Carolina as a local government reporter; another half a year living in Raleigh in between transferring colleges. I got to travel all up and down the coast of the Palmetto State and its neighbors, from the Spanish-moss framed squares of downtown Savannah to the Supreme Court steps of Columbia; from the Watermelon Festival of Hampton to the barn-sized dining hall/gas station/general store/karaoke bar/emporium of wonder known as Harold’s Country Club in Yemassee , and I realized something that I must share with you, fair readers; something that, once I checked and double checked my math, stood my preconceived notions about regional identity and historical traits on their heads. Disbelieve if you will, but I stand by my argument:

Here it is: I came across way more Confederate flags in New Jersey than I ever did in South Carolina or North Carolina.

How can this possibly be? Think about the scenarios alone: South Carolina — first to secede, home to John C. Calhoun and Sumter, a state where the NAACP economic boycott still stands; where all the controversy over flying the Confederate flag over the statehouse resulted in them agreeing to move the flag to the grounds, not get rid of it entirely; a state where a separate little league that was established to combat desegregation is still in operation today. Then there’s New Jersey, where I lived before going to college — the liberal, wealthy, densely populated, Obama loving, tax-heavy, largely highly educated state that it is.

But the flag imbalance is real (per capita), and I would even put this before some sort of fact-finding blue panel commission for study, like the ones that have been unsuccessfully trying to track down Julian Assange for years or the ones that successfully banned Four Loko across the country in 36 hours.

New Jersey’s love affair with the Confederate flag shows itself in odd ways: the walls of friends’ bedrooms while growing up; the back of trucks, NASCAR events; but often times on homes, stickers, and, maybe most commonly, on T-shirts and clothing. I eventually realized my friend with the one on his wall was (at the time at least) an outspoken racist, a fan of WWF (though so was I in those days) and the Dukes of Hazard (and eventually NASCAR too), even going so far as to make sure his first car was a similar year model Dodge Charger to “The General” from Dukes. 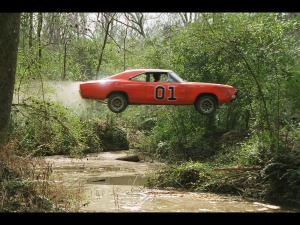 You’d see it on a lot of trucks too — and I do mean a lot — mostly in bumper sticker form, though often also in window decal, antenna ornament, flag or Calvin-pissing-on-something form. Finding a Confederate-themed do-rag, cheap T-shirt or other vaguely racist paraphernalia (think “I have a dream too” shirts with the confederate flag flying over a capitol building)  on the Jersey boardwalk was was easy as finding “HOT STUFF” beach shorts or shirts that proclaimed pride in being born to a family that once lived in Italy (did they show that part on MTV? I bet not).

You would see similar exhibits in and around South Carolina, but they were not nearly as prevalent: some bumper stickers, a flag here and there plus, a few ironic or vestigial ones, like the faded relic hanging above the bar in Pinkie Master’s in Savannah (as strong a liberal bastion as they get in Georgia, where the bar is enshrined with golden footsteps on the spot Jimmy Carter resportedly stood to announce he was running for president); or a bull head stripped clean of flesh and painted with the red, blue and white of the Confederacy and placed on sale among a table of similarly colored collectibles at aforementioned Watermelon Festival.

But, really, the Confederate flag wasn’t a “thing” like it was in Jersey, at least not in the way people sought it out to display. Why? I can only think of a few reasons, including that the South is still dealing with its private guilt over the events leading up to the war and the divisive decades that followed. It isn’t polite company to dredge up the ghosts of decaying soldier grandpa just when he was finally getting some shut eye (also of note: I never actually heard anyone say “war of Northern aggression” in anything other than an ironic, jestful manner). Another theory is that the reveling in the flag of the Confederacy is relegated to the diehards only, and there were many of those who far outshone their Northern impostors. The most-intense example I saw upon arriving in South Carolina in 2005 was during a lunch break one day in the car with Rob Sandler driving through Bluffton, S.C., where we noticed a black pick-up in front of us covered in two dozen stickers of various messages all related to the supremacy of the Confederacy, including this most jarring (though still syllogistically confusing, we thought) example: “If I would have known this, I would have picked my own damn cotton!” But South Carolinians, largely, are trying not to revel in the so-called “heritage” of the past as reflected through a flag.

New Jersey, in contrast, does not have the dirty racial history to come to terms with in the same way. And maybe that’s the problem — Jersey is a liberal state, but with strong pockets of isolationist groups who live and die by the Wal-Mart, produce children at rapid rates and further sequester behind the wall of disengagement in ratty suburbs or rural enclaves; plus, Jersey has a seemingly endless stream of horrific violent crimes that seem to make the front page of the paper every day. If these folks lived elsewhere, they’d probably be called rednecks; in New Jersey, they’re known as “Pineys,” an insular and occasionally terrifying tribe who share zip codes with Jersey Devil sightings, wear slippers to WaWa and were fond of the word “hiney” for some reason.  NASCAR hit a vein of popularity in Jersey in recent years; so did the Klan in the years before WWII. The popularity of the skinhead movement in the Garden State was always shocking when we heard rumors about it in as kids, and definitely disturbing when we realized they weren’t just rumors.

Do people in New Jersey fly the flag really support the Confederacy? Do they want nullification and the freedom to make trade tariffs with foreign powers and the rights for each state to determine whether it would allow slavery? It’s hardly a wise move to advocate the secession or overthrow of your Northern enemies while you yourself are living in one of those Northern states. Was it outright racism, channelled through a socially acceptable, vaguely coded symbol? Possibly. New Jersey is simultaneously too crowded and too grumpy for anyone to get along, so there’s no shortage of hate to share.

That’s not to say the South isn’t still dealing with its deeply rooted racial issues.

Institutional racial segregation in the schools has been around such a long time that people often confuse it for a process of natural selection; complicated land title clearance issues prevent descendants of the post-slavery blacks from ever truly profiting from or developing their (very valuable) land. The flag still flies on statehouse grounds in Columbia; but not far down the street, a statue will soon be erected in honor of South Carolina’s biggest country music star of all time — Darius Rucker, a Charleston native, lead singer of Hootie and the Blowfish and a black dude who has shook up the typically pasty white world of country. Small financial retribution comes in daily installments at the tourists markets in Charleston, where white cultural guilt conspires to encourage visitors to purchase handwoven sweetgrass baskets from the native Gullah residents — a skill passed down from generations that now extracts astoundingly high (we’re talking hundreds and hundreds of dollars) prices for a tiny souvenir.

The point here is that the people listed in the New York Times story are likely fringe groups: Civil War fetishists, regional historians with rosy-colored hindsight, well-intentioned history buffs who can’t see that their appreciation for the history in their backyard is an affront to the sensitive memories of some of their fellow Americans. When you look at New Jersey’s love of the flag, the connection isn’t there: even the lackluster standard “heritage, not hate” argument falls flat on its face in a sharp patch of pine needles.

One interesting final note: the first four results that come up when searching “Civil War” on the website of the Post & Courier, the oldest daily newspaper in the South, are all from 1998. This is either a stark commentary on the cultural relativism we need to take into account when discussing The South from afar, or a sign of the staggeringly poor search functions still operating on many modern newspapers’ websites (sadly, I think I know which one is more likely).

You want to hear the kinds of things they really talk about down south? Listen to this episode of The Moth recorded last year in Savannah, featuring Wanda Bullard, who tells the tales of being a small-town prisoner in ways only a Southener can.

5 responses to “Celebrating secession? Maybe you’re in the wrong place”