Too legit to quit? Bloggers pushing for mainstream respect 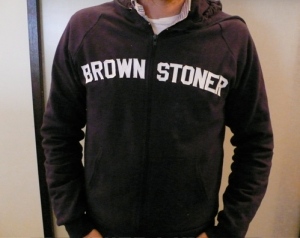 (WARNING: extreme inside-baseball logistical blog talk ahead) If there’s anything that’s a sign of our times in the shifting journalism landscape, it’s the increasing amount of indignation (and sense of right) bloggers have been expressing at being uncredited when they feel credit is due. Is this a sign that what was once-considered a parasitic medium has now reached a level of legitimacy that it is now suffering from parasites of its own? Yes, according to this inside-baseball but illuminating spat on Brownstoner over what Mr. B said was an uncredited scoop on the Whole Foods Brooklyn news:

So you fancy yourself a member of the media now? That’s a laugh. Sit around copying and pasting links all day from actual newspapers and you feel you deserve to be included amongst reputable publications that actually put in work and report the news? Your site offers absolutely nothing of value in terms of news and only exists to help your boyhood UES Manhattan pals sell overpriced real estate.

Go to school, work hard, and get a real job if it’s respect and recognition you crave. Or at least hire writers who know how to formulate sentences. Posting links to other people’s work does not make you part of the media. You write a blog and you run a dirty flea market. You’re no different than the other 100,000 yuppies who’ve moved to Brooklyn in the past decade. You’re quite far from being part of the media elite in this town.

Keep up the good work.

— Posted by EnglishKills in Here’s the New Whole Foods Rendering

After we broke the news yesterday of Whole Foods’ decision to go ahead with plans to build on a contaminated lot in Gowanus, Crain’s followed up half an hour later with a story of its own. And while neglecting to give our post a hat-tip, the business paper did come up with some interesting original content: This rendering. Neato.

Interesting to note: EnglishKills appears to be a regular and interactive commentator on the Brownstoner site for the past two years, so this comment seems out of the blue (also: the BK Flea is probably the cleanest flea market I’ve ever seen, but that’s another topic).

The comment created an interesting back and forth among commentators. It’s most likely Crain’s had a story about Whole Foods in its pocket well before the Brownstoner post (it has been big news and followed closely around Brooklyn for years now). But it’s also likely a Crain’s staffer did see the Brownstoner post first: the site (and its reporting) has become an indispensable resource for real estate news. Even so, I imagine Mr. B had half his tongue in his check when typing that post as a snarky swipe on the still-trenchant resistance of traditional media to site new media as the source of a news tip. 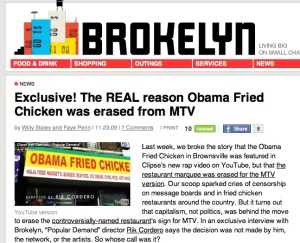 It’s easy to get upset about it, because it’s easy for big news outlets to write off smaller ones as not worth of comment. When Brokelyn’s Willy Staley broke the story about MTV deleting the “Obama Fried Chicken” sign from a Clipse video shot in Brownsville, The Daily News picked up the story but just summarized it. The Daily News even reran quotes Willy got from the video’s director. The Daily News story got picked up by NBC, and a link to some version of it eventually landed on Drudge Report — meaning all those news organizations who did little more than summarize the Brokelyn story got all the huge Drudge Reports page views, and the original source of the reporting got washed away down the line.

The Brownstoner controversy was going down concurrently with this week’s announcement that Gawker (the multi-kingdomed, long-toothed potentate of the blogodome) is restructuring its new beta site to be more like a legit news org instead of a blog — that is, less of a running tally of gossip posts throughout the day and more weighted, static content that will drive web hits to specific items. Like a front-page of a newspaper, where the lede story is showcased so it doesn’t get lost in the shuffle and highlights the hard work that went behind it.

Highlights of the Gawker announcement:

If we’ve demonstrated that a scoop generates audience, which in turn generates advertising, then what’s the problem? For that, let’s look at the biggest exclusive of all — early shots of the iPhone 4 — which made Gizmodo into a household name. That episode more than any other demonstrated the bankruptcy of the classic blog column.

In order to keep video of the iPhone prototype at the top of the reverse chronological flow, Gizmodo actually stopped publishing for several hours. How ridiculous! In any sane medium, a story as powerful as that, one which was drawing more than 90% of the site’s traffic, would be given commensurate real estate; and it wouldn’t require a hack to keep the item prominent. Hence the splash story; now we can finally create front pages that match the visual impact of a tabloid wood or magazine cover; and we can leave them up as long as they’re generating interest.

…And — in our current layout — there is no meaningful distinction between the quick post and a deeper story. Simple blockquotes and other short posts rapidly push our big exclusive down the page. If you’re a writer, why bother expending energy? Pursuing one objective (effective aggregation) undermines another (the promotion of big stories and features.) The skyline only helps a little.

We need a few breakout stories each day. We will push those on the front page. And these exclusives can be augmented by dozens or hundreds of short items to provide — at low cost — comprehensiveness and fodder for the commentariat. These will typically run inside, linked by headlines from the blog column, so the volume doesn’t overwhelm our strongest stories.

The presumption in the new layout is that every single substantial item will be built around imagery: a video, a gallery, a striking image or, if the words are strong enough, a text graphic. This visual slot will be 640×360 pixels in size — that’s 64% larger than in the current design — and be in the most prominent location on every page, above even the headline itself. Viewers will be able to toggle to a high-definition version.

Web publishers can tap not just the emotional and brand-building power of television commercials and not just (see below) the draw of appointment programming. We can even appropriate the idea of the commercial break.

…If the model sounds like TV, that is no accident. There is no future in low-end web advertising, at least not for a media company with any aspirations. We will offer a larger canvas for both our editors and advertisers; and pair their offerings in the way that the web has so far failed and TV has done so well.

It’s interesting that in its steps to long-term legitimacy, Gawker is following some of the old models, TV + print, while still trying to harness the lead horses of a profitable, internet news revolution.

Why do people love Gawker, its kin, and its imitators? Presentation. Top newspapers and other old medium still — quite frankly — have no fracking idea that a concept of “presentation” even exists on the web. Look at this screenshot from the San Francisco Chronicle’s homepage today. It’s a chronically (seewhatIdidthere) struggling newspaper in perhaps the most digitally savvy city in the country: 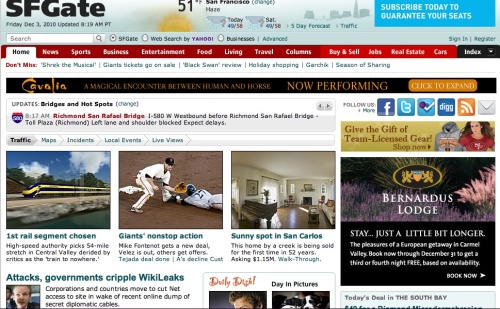 Where’s the lede art? Is your eye drawn to one specific point? Do you see a clear hierarchy of stories and items of interest? Or do you see a jumble of equally weighted items of indeterminate importance, intertwined ungracefully with advertising? If you saw a printed page like that, you’d wonder why you were reading a newspaper from 1910 before the concepts of modular design or printable art were even feasible (if it even piqued your interest from the news stand, which it probably wouldn’t, because look at that huge picture of Suri Cruise over there!) Why should the web so tone-deaf to presentation?

Gawker’s I09 gives an example of why they (and other sites like Gothamist, and even The Digitel in Charleston, which was founded by friends of this blog) are popular: they exploit poor design and play toward people’s desire for information efficiency. I09’s breakdown of yesterday’s NASA discovery gives the reader exactly what they want: sections titled “What did they find? “What does this mean for the search of extraterrestrial life?”, even “How skeptical should I be?” and “What’s next?” The info was repackaged from elsewhere in an easily digestible format. Which one are you going to read: I09’s outlined format, or the dense, convoluted Science Magazine original?

Anyway, as I type this, a Gawker reporter, along with reporters from CJR and the Daily News, is being interviewed on WNYC’s Brian Lehrer Show about the Albany press corps scandal involving reporters’ emails. The word “journalist” is being bandied about and no one is doubting whether Gawker belongs there.

Gawker admitted in its beta announcement that “gutter journalism” may have brought titles like Gawker and Deadspin into the mainstream. But if the site is pushing ahead into the future with a plan to put weighted, serious reporting above ticky tacky fodder for the commentariat — all while maintaining a real revenue stream, the rest of the media could end up following it closely. If not, we could end up just gawking from the sidelines.

This entry was posted in newspapers, writing and tagged brownstoner, gawker, i09, new media. Bookmark the permalink.

4 responses to “Too legit to quit? Bloggers pushing for mainstream respect”