Are you the Calvin and Hobbes generation?

I had this strip pinned to my wall for most of elem/middle/high school.

Confession: Though I like to think of myself as a born with ink in my veins newspaper nerd, and actually delivered our local newspaper for about two years, I never read much of the paper until well into high school. We had two that came to our house — the showy Asbury Park Press and the much smaller and more modest (and less newsy) Ocean County Observer — but I’d usually just give the front page a once over (to “see if any wars broke out overnight,” as I’d tell myself. Oh how innocent and peaceful you seem, mid-90s!) and then dive right to the comics. I looooved comics hard, in that proto-obsessive way that I’d later apply to The Simpsons, the later Arrested Development, then Scott Pilgrim, Doctor Who and eventually a relentless pursuit of tattooed girls who weren’t interested in me in Brooklyn dive bars.  This was (we’d later learn) at the end of the last golden age of newspaper comics, so I’d first devour Garfield, then the subtle absurdity of The Far Side, plus Curtis, and, of course, the subversive and endlessly imaginative Calvin and Hobbes.

At the time I treated Calvin and Hobbes like any other strip, save for the particularly elaborate Sunday panels. It was only later in high school and into college I began to see Calvin as an ADD-addled Holden Caulfield of sorts, a kind of bulwark trying to stand against the oncoming waves of nonsensical adulthood.

In connection with the release of the new documentary Dear Mr. Watterson, I wrote a story for the Post about the cult of Calvin and Hobbes and why its influence has remained so potent — particularly, I will say, among our generation, the late 20- and 30-somethings whose pliable young minds were ripe to be molded by the suspiciously smart Calvin, even as creator Bill Watterson faded into seclusion and never released another drop of Calvin art, or gave more than a hint of what caused him to remove himself from the spotlight. In that story, two things got cut from the final copy, so I want to talk about them here: 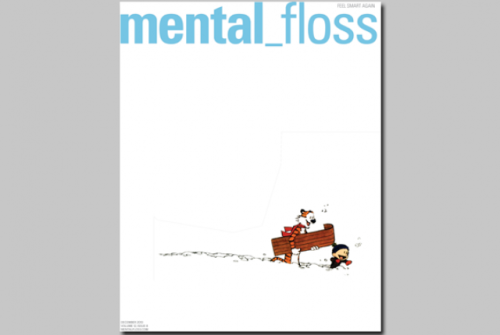 One, is this surprise interview Watterson did with Mental Floss magazine’s Jake Rossen. I asked executive editor Jessanne Collins simply: how the heck did you get him to agree to it? She replied:

We’d wanted to do a story on Calvin and Hobbes, but we were familiar with Watterson’s aversion to the press, so we were talking about how to go about telling that story for quite some time. Finally we just set a writer on it with no expectation that Watterson would participate. The writer reached out for comment to Lee Salem at Universal, who has been Watterson’s longtime proxy, and he also asked if he’d pass on a message to requesting an interview. Salem said he would, but that he doubted Watterson would respond. Jake assured him that the piece was about the strip as an artistic achievement — that he wasn’t going to pry into his personal life. And that worked! He agreed to an email interview. When Jake turned in the piece all of us were like, “woah, what!?” We were afraid for a second that it was an imposter. We figured we’d have to be extra diligent in factchecking. (Ultimately we were corresponding with Universal for the arts rights, so we knew they and Watterson were on board.)

The key there being, obviously, that the magazine didn’t want to pry into his personal life. The timing was good on Watterson’s behalf: not only was the doc coming out (which he is not in, btw), but C+H just became available in digital format for the first time. I asked her how big of a “get” the magazine considered it:

It’s a huge get. All of us here grew up on Calvin and Hobbes, so we were really excited personally. But we were also excited because this is such a great story that we had wanted to share with our readers for a long time, and it was amazing that ultimately we were able to not just tell the story, but to advance it for the first time in awhile.

Was he forthcoming, or did he skip interview questions?

It was conducted over email and as far as I know he answered all of the questions. He was forthcoming and thoughtful. His answers  showed a bit of his humor and sensibility.

The Mental Floss interview didn’t exactly crack open the mystery egg that is Bill Watterson, but it did provide a glimpse into his thought process about never releasing follow-up work, namely that he’s intimidated by his own success. The fact that he was willing to talk about that with a reporter makes me happy, as it shows there is legitimate journalistic value to talking about the work with someone who isn’t obsessed with the minutiae of the life of a very private person.

The other interview that didn’t make the cut was with Lisa Hanawalt, one of my favorite contemporary comic artists (whose alternate brand slogans, including Subway “eat a tube of food,” are pitch perfect). She was a huge fan of the comics growing up and exemplifies what I call the Calvin and Hobbes generation — the kids who were roughly the same age as Calvin when the comic was in its prime, who grew up to be self-described weirdos that vibrate just a few inches off of the mainstream wavelength and operate quite nicely in that fuzzy spot between childhood imagination and functional adulthood.

eat a tube of food, by Lisa Hanawalt.

“For me I just identified with having a stuffed animal that was real,” said Hanawalt, 30, of the East Village. “I always had a lot of stuffed animals. I totally thought they were real. I kind of thought that if i pretended hard enough I would turn into an animal.”

Hanawalt was an “indoor kid,” and not popular, but “I always had one or two close friends at school, people who could go into my imaginary world. I think reading books and getting into comics was a way out of that.”

She appreciates C+H on the two levels: one is as a kid, reveling in Calvin’s vivid imagination and escapism; the other is as a grownup, recognizing not only the deeper philosophical issues he dealt with, but also that his mom and dad were, through the eyes of a 30 year old, actually pretty cool adults, just trying their best to deal with an obnoxious kid.

“You never stop identifying with his ability to get bored and deal with that boredom by going into that imaginary world,” she says.

So here we all are, us 20 or 30 somethings, the ones heavily influenced by Calvin’s endless imagination and the tireless adventures of his imaginary (?) friend Hobbes, while their creator has gone seemingly forever into happy seclusion, without merchandise, franchising, movie adaptations or spin offs, leaving the legacy of his work in our own hands. Several people I interviewed for the story talked about saving wrapped copies of the anthologies for their kids, so they could experience first hand all over again. Maybe some of use never want to have kids because it all seems so boring compared to a blank snow day that is unencumbered adulthood. So what are you going to do with the legacy instead?