Frank Sinatra has a kale salad 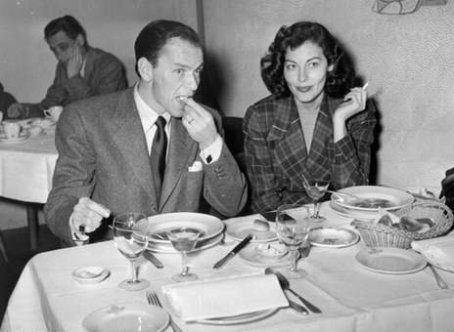 Frank Sinatra ate something once and someone probably reported on it.

Celebrities ate (and drank) a lot of things in 2013. Sometimes a print media reporter was present to capture it. Here is a 2013 history of food consumption as told through through celebrity profiles.*

“We’d each ordered curry, and when the young waitress came back to ask about the food, McQueen pointed at the B-grade health-inspector placard in the window, joking, in his hurried London accent, that it deserved an A.”

“At Frankies Spuntino restaurant in Brooklyn, Jimmy Fallon orders the peppers with anchovies to share.”

“I met Renata Adler on a cold December day – actually, on 12/12/12, a date that spawned mass weddings and superstitions – at the Grand Central Oyster Bar in New York. We realized within minutes of being seated that the plan was a mistake. Over endlessly echoing, impossibly loud lunchtime noise, we ordered Bloody Marys and the briniest mollusks and agreed to just treat lunch as lunch.”

“Alas, the bar doesn’t open till 8 p.m., the waiter tells us. Acceptance settling in, Hammer orders a steak, rare.”

“She orders us “a feast” to be charged to her room and even indulges in a $12 juice. ‘I only want the almonds-dates-vanilla-bean-and-sea-salt juice,’ she says, laughing. ‘I mean, this is the world we live in, where this exists as a combination.’ I raise the prospect of Bloody Marys. ‘Start drinking now!’ she demands, even though it’s only noon. ‘It’s the right time at the Chateau Marmont!’ ”

“Did you get a lot of candy?

I got a lot of candy, and I even got one Twix — the king size one.

Ohhh, that’s always the best. Have you eaten all your candy yet?

“He ekes out a coffee, makes himself a tea, and takes a seat on the couch in his living room, with a large-screen TV broadcasting NFL highlights from the mantel of a stone fireplace, and the high peaked ceiling crossed by rough-hewn timbers apparently salvaged from the Fortress of Solitude after Superman decided to modernize.”

“After lunch in a big mess tent pitched in a cold parking lot (where everyone loads up on ribs and grits and Louis-Dreyfus eats a kale salad), we head to her trailer, parked outside the soundstage.”

Scarlett Johansson, actress, Her: so many vegetables

“She bites the inside of her cheek when she thinks. There is an extremely large platter of cut vegetables on the table. “Crudités.” I say it out loud, a word no one used ten years ago.

“Speeding down the side of a volcano in a rental-car-colored Chevy Cruze, Honolulu spreading out like a sun-glazed mirage beneath us. Bradley Cooper is eating a salad and driving at the same time.”

“A distracted waitress refills Hader’s coffee to the brim, and as if on cue, his wife calls.

Hader picks up his too full cup of coffee, and the contents slosh over the brim. He considers the saucer moat for a second and makes a dissatisfied face, like he’s doing a Herb Welch sketch.”

“He punctuates his comment with a hearty, contagious laugh, before telling one of the funky cute waitresses that he’d like an iced tea, please, and water, thanks, and ice in the water would be awesome: ‘Thank you so much!’ ”

“Last week at New York’s Greenwich Hotel, M.I.A. hosted a parade of reporters. My turn came at the middle of the day; Arulpragasam, now 38, had already finished off a pot of tea.”

“From the chair where she’s sitting, in the conference room of her sleek office suite in midtown Manhattan, at a round table elegantly laden with fine china, crisp cloth napkins, and take-out sushi from Nobu, she could toss some edamame over her shoulder and hit her sixteen Grammys, each wall-mounted in its own Plexiglas box.”

“Several bottles of a very good wine were consumed, and dinner orders were placed: radish salads and hamburgers. Jay had fish.”

“He’s sipping from both a cup of coffee and a can of Diet Coke, and is a polite, even friendly presence, firm with his handshake and quick with a smile.”

“ ‘That’s my exact demographic.’ So here we are. ‘Should we just get drunk?’ she asks as the waiter sets a beer down in front of her.”

Kobe Bryant, basketballist: the No. 18

“It is the second to last day of summer, and Bryant is sitting on a stool at the bar inside the Haute Cakes Caffe in Newport Beach, Calif., waiting for order number 18: scrambled eggs, pancakes and a vanilla latte.”

“Now 40, Carruth still has a boyish handsomeness and quiet, intense charm about him, as well as a certain controlled asceticism — underscored when he ordered a salad with no dressing and a glass of water during a recent lunch.”

“In a little sushi restaurant in Syracuse, George Saunders conceded that, sure, one reality was that he and I were a couple guys talking fiction and eating avocado salad and listening to Alanis Morissette coming from the speaker above our heads. Another was that we were walking corpses.”

“Meanwhile, Star is arranging a little spread: candy bars, pumpkin pie, potato chips, corn chips, strawberry shortcake, peanut butter cups. Charlie goes for a candy bar, washing it down with a soda. This is how he spends his time today.”

*For a brilliant and definitive takedown of this journalistic trope (the one where the interviewer meets the interviewee over lunch and, short on time with only this brief window into their life to observe, and desperate to inject some personal details into the otherwise formulaic profile, clings desperately to the only scraps of personality they can witness, namely the way the celebrity ate their salad or interacted with a waitress), please read Chapter 9 of Jennifer Egan’s A Visit From the Goon Squad, in which she brutally deconstructs the habit using the vehicle of a creepy interviewer and an imperiled celebrity starlet, set, naturally, as a meal is being ordered in a restaurant.

The title of this post, of course, is a reference to “Frank Sinatra has a cold,” Gay Talese’s 1965 Esquire profile that is considered to be perhaps the apex of the story form.

This entry was posted in writing and tagged celebrity interviews, interviewers, journalism, tropes. Bookmark the permalink.

One response to “Frank Sinatra has a kale salad”