Part of the Trader Joe’s corporate philosophy is that it doesn’t advertise at all. It relies on word of mouth to get people into the store, and saves the money it would spend on advertising to cut costs elsewhere (like, paying health insurance for its employees).

But if it did advertise, it should probably include something like this:

Mrs. McGirt was identified in the store Saturday afternoon when Dave noticed an older woman wearing an ODB T shirt. Not terribly unheard of in Brooklyn, but still worthy of comment. Dave told her he liked her shirt.

Another employee who rang her up later confirmed her name on her credit card as Cherry Jones, ODB’s momma. Not sure what she bought, seeing as we were fresh out of organic free range neck proteckors.

Here’s a video of Ms. Jones talking about Oh Dee Bee’s connections to the neighborhood and how he just liked being one of the people.

“Dirty was never considered as famous. Never. Cause he never left Brooklyn. We lived in midst of the people. He took trains. And buses, not limos.”

Then after the store closed at night, someone turned off the regular rotation of ’80s muzak and put on Ghostface’s “Ironman” album. It was a pretty good day at work.

1. Ate dinner in a restaurant down the block one table over from Billy Joel and Christie Brinkley’s daughter, Alexa Ray Joel.

2. Might possibly have kinda stumbled up the apartment stairs half drunk and decided to … sort of … borrow … a projector screen that belonged to Michael Ian Black at one point.

1. Roommates Brittany and Christine eyed the adjacent table when the party first sat down and launched into hushed-tones conversation about where they recognized the people from. After many minutes of debate and brain-searching, an epiphany was reached. Christine pulled out a pen, quickly scribbled something onto a napkin and passed it over to my side of the table: “That’s Billy Joel’s daughter,” it said.

How could you possibly know such a thing?,  I asked later. We just do, they said. Brittany is apparently an eagle-eyed celebrity scout. Good thing we left when we did too, Brit and Christine said, because another margarita or two and their tendency to spew forth inappropriate comments about adjacent tables would have come out. And I may even have joined in with my opinion about how BJ is only the second-best piano player from my childhood, well behind Rowlf the dog.

2. How could you possibly know such a thing?, you’re asking me as you read this. Two reasons: One, because of previous knowledge of the building’s most notable former tenant. The other reason might have something to do with this:

The projector screen has been sitting up against the wall of the hallway for nigh on two years now (as the baggage claim date shows) and seeing as Showalter has now vacated the building, the consensus in our apartment (by a 2-1 vote, at least) was that it was up for grabs at this point. Much trash is often left out in our building hallway for grabs or until someone finally decides to take it down to the curb, a collection that also includes: a 24 (the TV show) board game, a case of empty bottles of He’Brew, the “chosen beer,” and the sad remnants of what looks like a futon.

for advance screenings of I Love the 80s

There is a purpose to this borrowing of the discarded film equipment, of course. Our apartment has no TV but does have a projector that takes input from DVD players, VHS and laptops, projected onto the living room wall. With a real screen, Christine said, we can finally paint that wall a new color. With a new screen, Brittany said, we can finally hold dinner parties and show interesting film footage as background entertainment. With a screen, I though, finally no one will have an excuse not to watch my hour-long Powerpoint presentation on new revenue models and cost dividend projections for fiscal solvency in the digital age of newspapers.

All this while, a disgustingly overdue reunion of The State is taking place in San Francisco, and Showalter and Black’s new show, Michael and Michael Have Issues, is getting picked up for a full season. So I’m pretty sure they can afford another one if needed.

But if they ever want the screen back, wacky neighbor Michael Ian Black is welcome to knock on the window and ask for it, at which point I’m sure we will be glad to hand it over, if this crazy sideways apartment doesn’t kill us first.

Posted in adventures in subletting, brooklyn

People my coworkers have told me I look like over the past three weeks.

3. That Other White Dude, You Know, The One from Manhattan? With the Beard? Aren’t you Guys Friends or Something?

4. Mr. Tumnus from the Chronicles of Narnia 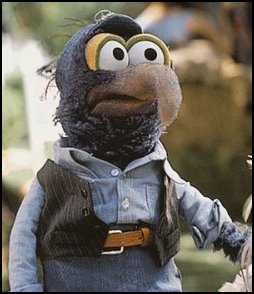